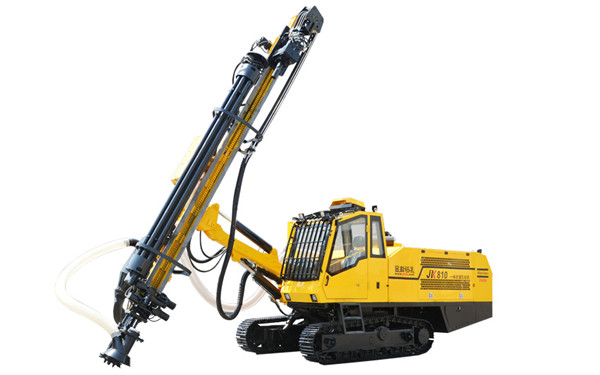 cross-section in solid materials like land or mud. This rig includes the drill bit which is usually

a rotary cutting tool, often multi-pointed. This drilling bit is pressed against the land of mud and

it is rotated at rates from hundreds to thousands of revolutions per minute. This forces the cutting

edge against the land or mud, cutting off the apparatus from the hole as it is drilled. In rock

drilling, the hole is usually not made through a circular cutting motion. Instead, the hole is

from the Drilling rig machine. The hammering action can be performed from outside the hole

(top-hammer drill) or within the hole (down-the-hole drill, DTH). Drilling may affect the mechanical

layer of highly stressed and disturbed material on the newly formed surface hole. This causes the

land to become more capable of corrosion and crack propagation at the stressed surface. A finish

operation may be done to avoid these detrimental conditions. Drilled holes are characterized by

• Down-the-hole drilling, usually called DTH by most professionals, is performed by a mini

jackhammer screwed on the bottom of a DTH drilling rig. The fast hammer action of the DTH drilling

the DTH hammer. DTH hammer is one of the fastest ways to drill hard rock and land. Now smaller

newer and efficient technology. The system is thought to have been invented independently in Belgium

and Ingersoll Rand in the USA in the mid-1950s. The origin of the name - DTH is short for

“down-the-hole”, Since the DTH method was originally developed to drill large diameter holes

downwards in the surface, another reason is the fact that the percussion mechanism followed the bit

down into the hole. Applications were later found for the DTH method underground, where the

direction of drilling is generally upwards instead of downwards.

purposes. In rotary crushing, the most commonly used bits are three-cone drill bits covered by many

bit is rotated. The downward thrust is achieved by the weight of the drill rig itself, and the

rotation is applied at the end of the drill pipe. This rotation is provided by a hydraulic or an

electric motor, and the rotation speeds often vary from 50 to 130 rpm. Further, compressed air is

often used to discharge cuttings from the bottom of the hole. The size of the gap between the drill

pipe and the wall of the hole is related to the flushing of the drill cutting apparatus. In case

the gap is too narrow or too wide, it will lower the drilling speed. Additionally, rotary drilling

is suitable for borehole sizes from 200 to 450 mm in diameter. So good so far, rotary drilling has

been the dominant method in large water well drilling. One of the disadvantages of rotary drilling

rigs is that they are not suitable for drilling an inclined borehole, which is favorable to the

side-tracks, and replacing segments of an existing water well for several reasons. One of these is to

infiltrate and expose a new reservoir for natural water resources. Another is to bypass a damaged

water well section. In addition, another subordinate reason might be to drill around unrecoverable

place. Furthermore, If we shed light on the technical aspects of hydraulic drilling, drilling

hydraulics is considered as the most important factor in drilling performance. The rate of

optimization to minimize the company's drilling cost. The goal of this optimization is to make the

maximum utilization of the pump's power to help the bit drill a hole at maximum efficiency. This is

• In the Truck-mounted drilling process, the drill bit from the powerful drilling rig is pushed into

the well, and drilling fluid or "mud" is pumped through the drill pipe into the well. The drilling

earth. The density and chemical composition of the drilling fluid must be restricted to fit the

water well conditions. Otherwise, the well could collapse or otherwise destroy itself in such a

process. The rig supervisor and the mud engineer work together to make sure the drilling fluid is

properly formulated and the drilling rig machine is put to the best use. Moreover, the well's purpose

will usually determine how it is finished. An exploratory well will usually be complete. In most

cases, this means a cementer is brought to the drilling rig to formulate a cement plug to shut it

off. If it is a production water well, it will be connected to a pump system to extract the water from

the well into some kind of storage--like a tanker ship for off-shore wells. This type of drilling

commonly for drilling smaller diameter deep holes. The depth to diameter ratio can be even greater

than 300:1. The key feature of this method of drilling is that the bits of the drilling rig machine

are self-centering; this is what allows for such deep and accurate holes inside the surface of the

earth. The bits utilized in this DTH/DR drilling rig machine use a rotary motion similar to a twist

drill; however, the bits are specifically made with bearing pads that slide along the surface of the

hole keeping the drill bit on center. this type of drilling method is usually done at high speeds

and low feed rates. DTH/DR drilling is based on rotating a cutting tool around its axis

simultaneously, about a center axis that is offset from the axis of the cutting tool. This cutting

tool can then be moved altogether in an axial direction to drill a hole in the land, and/or combined

with an arbitrary sidewards motion to machine an opening or cavity. Further, By adjusting the

offset, a cutting tool of a specific diameter can be used to drill holes of different diameters as

per the client's/customers' requirements. This implies that the cutting tool inventory can be

used to make holes into or through the land, earth, or other materials like rock. These drilling

machines use a drilling tool that has cutting edges at its endpoint. This cutting tool is held in

the drill machine by a quill taper and is rotated and fed into the land, rock, or any surface at

constant speeds. Drilling machines may be used to perform other operations, like they can perform

machine is the most common process in drilling industries. Further, control engineering is one of

the aspects, which have proven to have been given a great deal by many researchers and

professionals. It became a great concern in many drilling areas such as industry, agriculture,

medicine, education, and infrastructure. This Automatic control system has emerged as an integrated

part in water well drilling, mud drilling, and other rock drilling applications. This project is

devoted to the use of an automatic control system in the drilling industry.