How To Extend Life Of The Highway Guardrail Drilling Machine?

1. To ensure the normal operation of the guardrail pile driver load. The size and nature of the operating load of the guardrail pile driver have the primary influence on the process of mechanical loss. The wear of parts is added proportionally to the load. When the load received by the parts is higher than the uniform planning load, the wear will increase. Other things being equal, a stable load is less likely to wear and tear than a moving one, with few drawbacks and lower life. Compared with the engine operating under a stable load, the wear of its cylinder will increase by 2 times. The engine operating under normal load has a lower defect onset rate and longer life. Overload of the engine, the defect attack rate significantly increased, and life will also be less than the planning guidelines. Mechanical wear, which is often subject to large-scale load changes, is greater than that of continuous stable operation 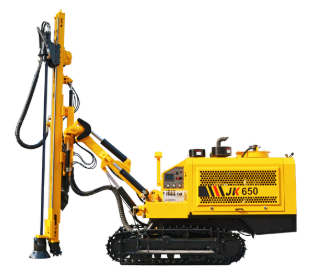 2. Reduce various corrosive effects. Crawler Mounted Pneumatic Drill Rig supplier tells you that guardrail pile driver metal surface and surrounding medium attack chemical or electrochemical action and damage phenomenon called corrosion. This corrosion will not only affect the normal operation of mechanical surface equipment but also will corrode the parts inside the machinery. As a result of this corrosive effect is sometimes invisible, touch, a brief by negligence, the greater the harm. The handling and operating personnel should adopt useful methods according to the local weather conditions and air pollution conditions at that time. The chemical corrosion has an impact on the machinery to prevent rain air from entering the machinery and reduce the operation in the rain as much as possible.

3. Reduce the influence of mechanical impurities. Mechanical impurities generally refer to dust, soil, and other non-metallic materials and guardrail pile driver in the use of the process of their own attack of some metal chips, and wear products. There are impurities inside the machine, reaching the collaboration surface of the machine, its harm is very big, not only make the relative movement out of retardation, but also accelerate the wear of parts, and will scratch the collaboration surface, damage the lubricating film, make the temperature of the part add, lubricating oil transformation.

4. Reduce the influence of temperature. Guardrail pile driver in the operation, the temperature of each part is not the same. Such as the general cooling water temperature is 80-90 ℃, the temperature of hydraulic oil is 30 to 60 ℃, below or above this size will speed up the process of wearing parts, lead to the disintegration of lubricating oil, constitute a material function change and so on.

Highway guardrail drilling machine to extend the service life of the method is these four, want to know more about the drilling machine consulting, quickly pay attention to Jinke technology website.

Previous: JKS600 is working in Russia

Next: What are the reasons that affect the drilling speed of highway drillers?