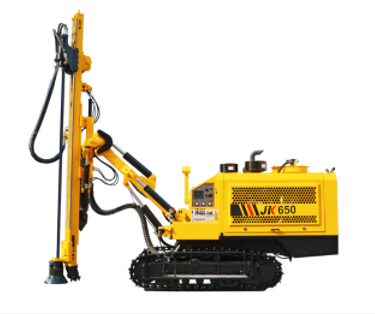 DTH driling rigs are mainly based on high frequency impact crushing method, which can often achieve more than 10 times the drilling speed of conventional drilling methods. However, the application is easily affected by the operation process, the complexity of the formation and other factors to produce various accidents.

The location of hammer head fracture mostly occurs at the reducer of the upper end of the hammer head spline.

The common causes of hammer head fracture are:

(1) the use of good quality manufacturers, in order to reduce the quality of the hammer head and the occurrence of accidents in the hole. Hammer head quality strict inspection, strictly prevent damage to the hammer head into the well.

(4) When drilling soft rock formations, lower the drilling pressure to prevent the carbide teeth from eating into the rock too deeply, which will lead to an instant increase in torque on the hammer head.

(5) Use a diving hammer with an anti-release sleeve as much as possible to prevent the hammer head from falling into the well when it breaks.

(6) If the hammer head breaks into the bottom of the well, it should be salvaged in time.

The main reasons for the abnormal chipping of hammer head teeth are divided into 3 aspects: stratigraphy, drilling technical parameters and operation methods.

(1) Adjust the technical parameters of drilling in advance.

The blockage of falling objects is due to the unclean drilling tools and ground pipeline, the inner wall of the attached materials, especially the rust and tiny debris on the inner wall of the new drill pipe, which fall off to the upper end of the submerged hammer under the action of compressed air and block the air duct, resulting in poor air supply or no air.

(1) Clean the ground air pipeline, especially the gate valve and the elbow of the pipeline, which are difficult to clean.

(1) carefully check the backstop valve of the submersible hammer before drilling, and replace damaged parts.

(3) Strictly enforce the operating procedures to avoid blockage of the rock powder due to improper operation.

(4) Use a reasonable combination of drilling tools, and add a floating valve joint at 150-200m of drilling tools to overcome the backward suction of rock powder caused by the pressure difference in the circulation channel.

(5) When the air supply is not smooth, immediately move the drilling tool up and down drastically, and then start drilling immediately for inspection after it is not effective.

We are a DTH Drilling Rigs supplier, please feel free to contact us if you need them!

Next: De-dusting System and Principle of DTH Drilling Rigs