Analysis on Types and Principles of Water Well Drilling Rig

I have been talking about some knowledge of well-drilling rigs in use and maintenance. Now let DTH drilling rig supplier talk about which types of well drilling rigs are divided into, which parts are composed of, and what are the advantages of each.

First of all, the first type of impact water well drilling rig mainly relies on the vertical reciprocating motion of the drilling tool, so that the drill bit impacts the bottom of the well to break the rock layer. Its structure is simple, there is no circulating well washing system, and the removal of cuttings and drilling rigs cannot be performed at the same time, so the efficiency is low. The drilling depth is generally within 250 meters, sometimes up to 500-600 meters. There are 2 main types:

① Punch the cone. Use the weight of the drilling tool to impact the formation. At the lower end of the drill, there are several sharp-angled grasping flaps that can be opened and closed. When the drill moves downward under its own weight, the grasping flap opens and cuts into the rock layer, and then the hoisting machine lifts the drill through the wire rope. During the process, the cuttings are caught into the cone, and the wellhead is proposed to discharge the cuttings. The drilling depth is usually 40-50 meters, and the deepest is 100-150 meters.

② Wire rope impact drilling rig. It consists of a mast and a lifting pulley, wire rope, impact mechanism, drilling tool, motor, etc. mounted on the top. During operation, the motor drives the impact mechanism through the transmission device to drive the steel wire rope to make the drilling tool reciprocate up and down. When it moves downward, it cuts into and breaks the rock layer by the weight of the drill bit, and the steel wire rope pulls it upward. The drill stroke is 0.5 to 1 meter, and the impact frequency is 30 to 60 times per minute. The cuttings are cleared out of the ground by the sand pumping cylinder, and the drilling and removal of cuttings are performed simultaneously. 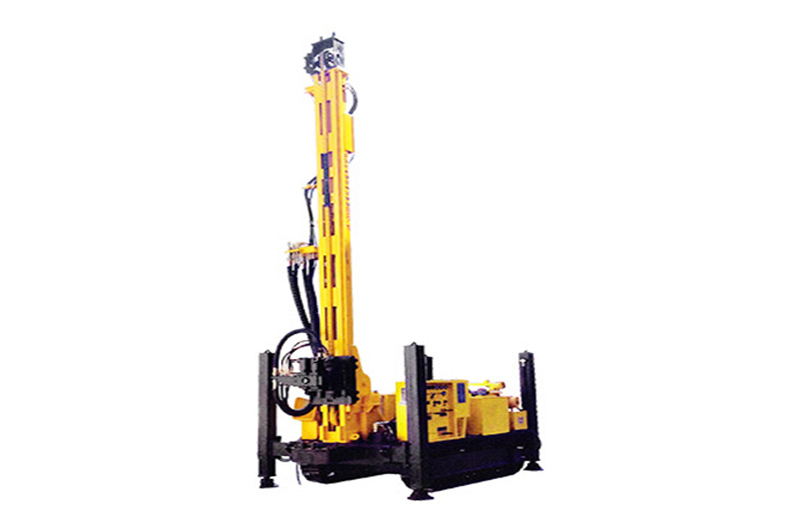 The second is the second rotary water well drilling rig, which mainly relies on the rotary motion of the drilling tool to break the rock formation to form holes. There are five main types:

(1) Pot cone. Use its pot-shaped drill to rotate and cut the soil layer. According to the size of the drilling tool, they are called big pot cone and small pot cone respectively, which can be driven by manpower or power. The cut soil fell into the pot, lifted to the ground and discharged. The structure is simple and the efficiency is low, suitable for the general soil layer or sand pebble soil layer. The drilling depth is 80-100 meters for the small pot cone and 30-40 meters for the large pot cone.

(2) Rotary drilling rig for circulating mud well washing. It is composed of towers, hoist, turntable, drilling tool, mud pump, faucet, and motor. During operation, the power machine drives the turntable through the transmission device, and the active drill rod drives the drill bit to rotate and break the rock layer. There are positive and negative circulation methods. When the positive circulation drilling rig is working, the bottom cuttings are taken out of the wellhead through the annular channel outside the drill pipe. After the sedimentation tank settles, the mudflows back to the mud pool for circulation. When the reverse circulation drilling rig is in operation, the mudflows into the bottom of the well from the wellhead after sedimentation in the sedimentation tank. The mud carrying the cuttings is pumped up by the sandstone pump through the drill head nozzle through the bore of the drill rod and sinks back to the sedimentation tank. The drilling rig forms a high ascending flow rate in the drill pipe and has a strong ability to expel debris and pebbles. The drilling speed is fast. It is suitable for soil, sand, and loose formations with a diameter smaller than the inner diameter of the drill pipe. The drilling depth is generally within 150 meters.

(3) Compressed gas washing rotary disc drilling rig. On the rotary disc rotary drilling rig, an air compressor is used to replace the mud pump, and compressed air is used to replace the mud to wash the well. Usually use reverse circulation, also known as gas lift reverse circulation. It is suitable for arid areas with large-good depths and lack of water, as well as the frozen soil in the cold zone.

(4) Hydraulic power head drilling rig. It is driven by a hydraulic motor through a speed reducer, and the powerhead that moves up and down along the tower replaces the turntable and faucet on the rotary rig, driving the drill rod and bit to rotate to cut the rock formation. Large-diameter water wells can be drilled.

There are two kinds of the third compound water well drilling rig:

One is a water well drilling rig that combines impact and rotation together, such as a pneumatic DTH hammer rig. Down-the-hole hammer drilling tools consist of cylinder liners and pistons. The high-pressure air provided by the air compressor pushes the piston up and down to reciprocate, impacting the drill bit to enhance the drill's ability to drill into the rock formation. At the same time, the drilling tool rotates at a lower speed of 35-60 rpm. The air discharged from the upper and lower cavities of the piston enters the drill bit and brings the cuttings at the bottom of the hole out of the wellhead. Pneumatic down-the-hole hammer drilling rigs can be used for drilling deep wells in hard rock formations with high drilling speeds and relatively straight boreholes.

The other is the addition of an impact mechanism on the basis of the rotary table rotary drilling rig, mainly rotary drilling, and the dual-use well drilling rig drilled by impact when it encounters a pebble layer has strong adaptability to various formations.